The founder of IKEA had a philosophy that customers shouldn’t shop while hungry. He added a food court to the stores with a lot of options. Being Swedish, he wanted to make sure that people could taste some of the food from his homeland. As most people know, Sweden is known for its meatballs. The question is, will it fit the keto diet and/or the gluten-free diet?

For the keto diet, that will depend on precisely how many carbs are being consumed. A serving of four IKEA meatballs has three grams of carbs. This does not make it particularly keto-friendly, especially when paired with the mashed potatoes and gravy. The chicken balls have five grams and the vegetable balls have sixteen grams. Of the three, the meatballs would be the best fit.

The keto diet is all about limiting carbs in order to get the body into a state of ketoacidosis. This state allows fat to be burned at a higher rate and records a great deal of weight loss. A lot of diabetics use this diet as it also helps control blood sugar. However, the diet can be dangerous and should be medically supervised… particularly if there are any underlying health problems.

The gluten-free diet has fewer complications in the health department, but it is a lot harder to follow when purchasing premade products. Even with careful inspection of package information gluten can sneak in. However, many companies are working to help people with sensitivity to gluten find the products they need. IKEA is one of them.

The ingredients in the vegetable balls change depending on the season. This is because IKEA prefers to keep its carbon footprint low and uses what is seasonably available. Sustainable farming is central to the company’s tenets.

There are other considerations that went into the crafting of these meatless meatballs. A lot of the time those who make fake meat use soy as the base. This is a problem for those who are allergic to it, but an even bigger problem for those who have or are at risk for hormone-related cancers. Soy contains phytoestrogen, and that can trigger cancer growth.

With chickpeas, kale, peas and other healthy vegetables in the veggie meatballs, they are the healthiest choice of the three. Studies show that those who eat more vegetables are healthier than those who rely mostly on meat in their diet.

The biggest drawback to all of the IKEA meatballs is the sodium content. This is not something that is found only in these products. Almost all processed foods have a lot of sodium in them. Those with health issues that become worse with large amounts of sodium should always read the ingredient labels. 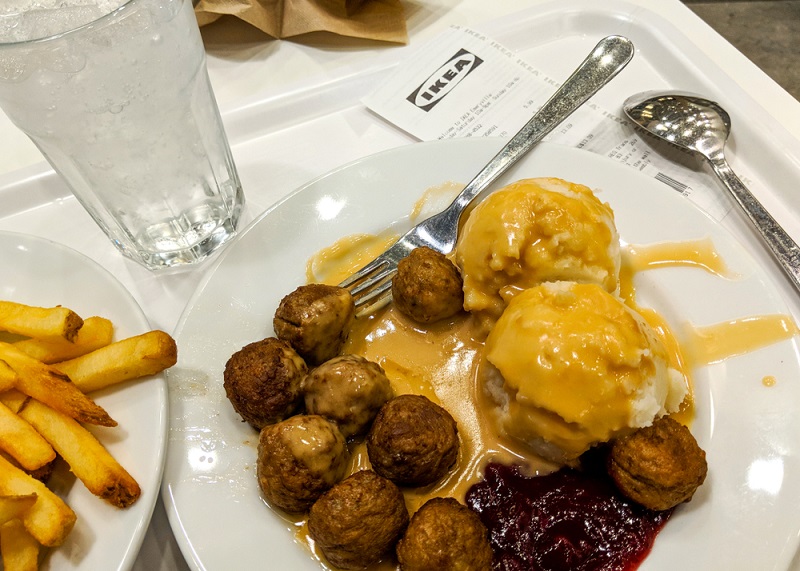