The Tools You Need To Assemble IKEA Furniture

While IKEA seems to think a screwdriver and maybe a hammer are all that’s needed, is it? Experts at putting together IKEA furniture don’t agree. There are a few more things you’ll need if you want to put it together without dents, scratches and loads of frustration.

IKEA furniture is made largely of manufactured wood. It’s an upgraded version of particle board, and as such will scratch easily. It can also scratch flooring if it is wood or tile. A drop cloth will protect both the furniture and whatever surface is being used to put it together.

It is also possible to use the IKEA box, but that is not necessarily a good idea. Cardboard can be slippery, making it harder to put things together. It may also increase the chance that screws and other round items will roll away.

Let’s face it; there are a lot of tiny screws that need to go into the furniture. A power tool will help tremendously and save your wrist from pain as the day wears on. If you have a power drill, that’s great. If not, power screwdrivers are cheaper. They aren’t as fast as a power drill, but it’s still better than the alternative.

Metric hexagonal bit set. Sure, you could use Allen wrenches as recommended by IKEA, but it can be a pain. These go into the power drill/ power screwdriver so that those wrenches are not needed. This makes it much easier to put it together.

Wait, what? Well, some of those screws are delicate. They require a hand tool, but that doesn’t mean it has to hurt the hand. Turn-lock fasteners are notorious for this and will work much easier with this sort of screwdriver. They only require a half turn, but think how many there are!

There are a lot of pegs in IKEA furniture, particularly the larger pieces such as beds. Not getting the peg in properly can lead to problems with the furniture. When the pegs fall out, slats can fall out and beds and/or couches will sag.

A lightweight hammer can help get the pegs in without the extreme threat of denting or making a hole in the piece. Heavier hammers could possibly cause damage. A tack hammer comes to mind as the possible best bet here.

Like the ratcheting screwdriver, a rubber hammer is for more delicate areas. It is also for areas that might show and a hole in it would be problematic. Rubber hammers can still make dents, etc. However, they are less likely to do so.

Ok, you’ve put it together. Most likely it was with a significant other or a friend, with plenty of arguments along the way. No one wants to make dinner and most of the time, unless it’s a simple side table, everyone is tired. Having something to look forward to will make the whole thing much easier. 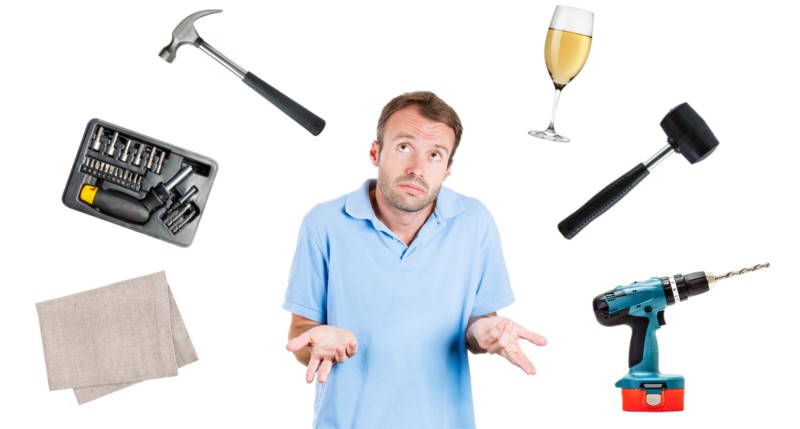